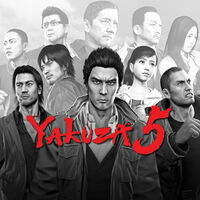 Yakuza 5 is a 2012 open world action-adventure video game developed and published by Sega for the PlayStation 3. The game is the fifth main entry in the Yakuza (series) of action-adventure games. The game was released in December 2012 in Japan, and localized for North America, Europe and Australia as a PlayStation Network download exclusive in December 2015. The game features a new graphics engine, unlike previous PS3 games in the series that have been re-utilizing the same engine since Ryū ga Gotoku Kenzan!. For the first time in the series, it features five settings across Japan along with five playable main characters. This game is also the first in the series to have a digital only release in the West.

For the first time in the series, the game features five distinct locales across Japan. First of which will be returning from previous games is Kamurocho (a.k.a. Kamuro City), a fictionalized yet realistic recreation of Shinjuku's red-light district, Kabukichō. Second is Sōtenbori, a fictional Osaka district based on Dōtonbori, which is returning from Yakuza 2. The three new cities in the game are Nagasugai, part of the fictional Fukuoka based on Nakasu, Tsukimino, part of the fictional Sapporo based on Susukino and Kin'eicho, part of the fictional Nagoya based on Sakae. According to producer Toshihiro Nagoshi and writer Masayoshi Yokoyama, it will be like the "Grand Theft Auto: San Andreas" of the Yakuza series, in that it is a "massive expansion on the core concept that takes the franchise to new heights."